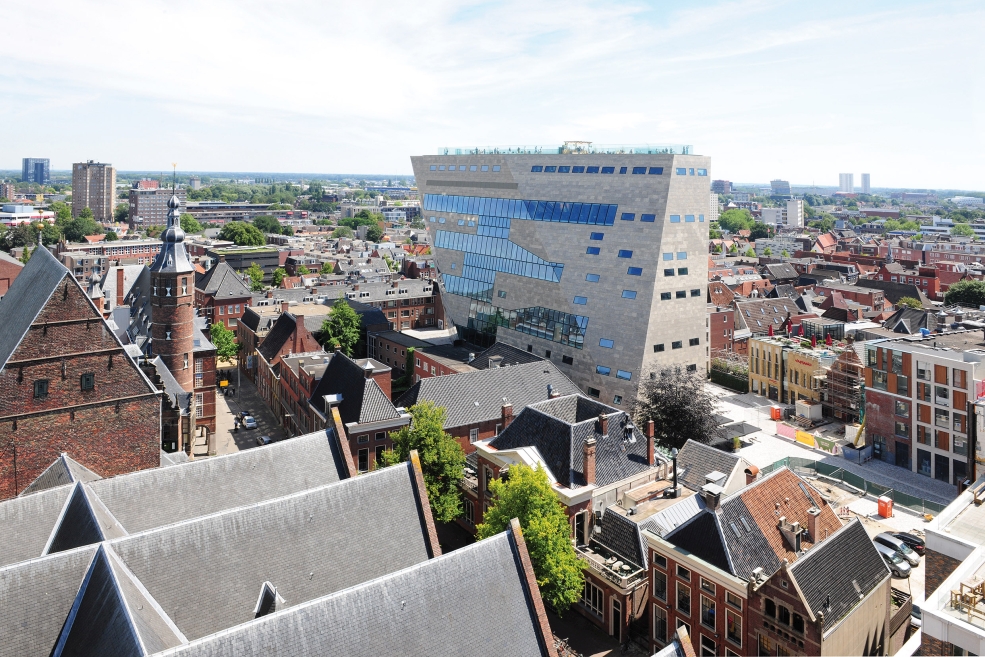 Drainage solutions from Richard Brink for the Forum Groningen

The striking structure of the Forum Groningen shoots up into the sky out of the otherwise historical heart of the Dutch provincial capital of Groningen. The unique architecture of the building boasts unconventional approaches both inside and out, and invites visitors to discover innovative design concepts throughout, from the ground floor to the roof terrace. Drainage solutions from Richard Brink are used both on the terraces and the internal courtyard below, including the steps.

For years the area around the centrally located Grote Markt square eked out a rather mundane existence, but now, thanks to the Groningen municipality’s urban planning initiative, this neighbourhood has undergone a remarkable facelift. Old buildings were taken down to give the area more space and create a new, modern square in the form of Nieuwe Markt. This square connects to the Grote Markt through the imposing Forum Groningen, which now stands where there was once a parking block.

The parking spaces had to give way to a construction project that was breathing life into the radical design of Dutch architectural firm NL Architects – a design that had been awarded the contract already back in 2007. Construction began in 2011, carried out by local firm BAM Bouw en Techniek. Once the Forum Groningen was completed at the end of 2019, it quickly became clear why the unique design was selected. The sharp-edged, tapered monolith, which boasts approximately 17,000 square metres of floor space inside, shoots up around 45 metres into the sky, setting it far apart from the historical town-centre buildings around it, both in terms of its architectural design and its sheer size. Yet despite its distinct look, the oversized structure still manages to fit in well with the cityscape thanks to its natural stone façade, which features stones of different formats. Individual windows and rows of large-format windows break up the otherwise smooth, even appearance of the building’s shell and flood the interior with natural light.

At the heart of the Forum Groningen is an open, spacious atrium, revealing why the Forum is most often described as a ‘cultural department store’. Escalators bring visitors to the individual levels of the atrium, a network of different open spaces and public squares, which NL Architects says break down the traditional barriers between institutions such as libraries, museums or cinemas. Instead, the building aims to create completely new meeting places for people, as well as spacial overlaps, which combine all of the functions of the cinema, museum, library, offices and workstations, and conference and event rooms into one.

The city at one’s feet

The unparalleled interior design extends to an approximately 800 square metre roof terrace, which affords a unique view of the city. Glass balustrades run along the edges of the roof surface, providing safety without blocking the panoramic view. Steps lead from an open internal courtyard on the roof to the raised terrace itself. A rooftop café in the courtyard provides a place to sit and invites guests to stay a while for a drink or bite to eat.

The exposed position of the terrace and internal courtyard means that this area needs effective drainage to redirect falling precipitation – and above all else, the drainage solution also needs to be as discreet as possible. To this end, channels were to be installed both in front of the glass balustrades on the roof and the glass walls of the courtyard, as well as along the sides of the steps. Van Stokkum B.V. based in Venlo was commissioned to install the channels. In addition to appreciating the discreet look of the drainage solution in line with requirements, the installers were also very satisfied with the easy handling of the products and the ability to adjust the height of the channels, as the substrate itself has different levels. After extensive consultation with Richard Brink GmbH & Co. KG, the channels and gratings from this metal products manufacturer were ultimately selected for the project.

The project managers opted to install the Lamina slotted drainage channel along the railings at the edges of the roof terrace and immediately in front of the top step. A total of 149 metres of the stainless steel channels were used. The ability to adjust the height of the channels made it easier for the installers to balance tolerances so that the channels would follow the level of the surrounding panels exactly. The bracing levels of the slotted channels also make them highly resistant to shear forces. The installers additionally installed drainage gullies with covers that matched the surrounding panel material so that they would blend in perfectly with the overall design while also allowing for easy access for maintenance work. The Lamina slotted channels and gullies together form a hardly noticeable, closed drainage system.

Two other channel types and drainage gullies from the metal products manufacturer form a second independent system and are installed in the lower-level internal courtyard and along the steps. A total of 23 metres of Stabile drainage channels are installed along the steps for the targeted redirection of falling precipitation. The channels, which are made of stainless steel and covered with mesh gratings, follow the gradient of the steps precisely, blending in as discreetly as possible with the outdoor area. At the level of the internal courtyard itself, 37 metres of Cubo drainage channels run along the glass façade. These too are covered with the same stainless steel mesh gratings as the Stabile channels on the steps. Together the Cubo and Stabile channels form a uniform, seamless drainage system running from the internal courtyard up to the roof terrace.

Thanks to the high quality and craftsmanship of the products and the manufacturer’s partner-like approach to problem-solving in the planning and implementation of the drainage systems, Van Stokkum B.V. were able to install the products with ease. ‘Working with our client BAM Bouw en Techniek and with Richard Brink, we were able to find the best drainage products for this construction project, which is one of a kind in the Netherlands. The collaboration was always focused on solution-oriented partnership,’ concludes Ruud Kersten, an engineer at Van Stokkum B.V.