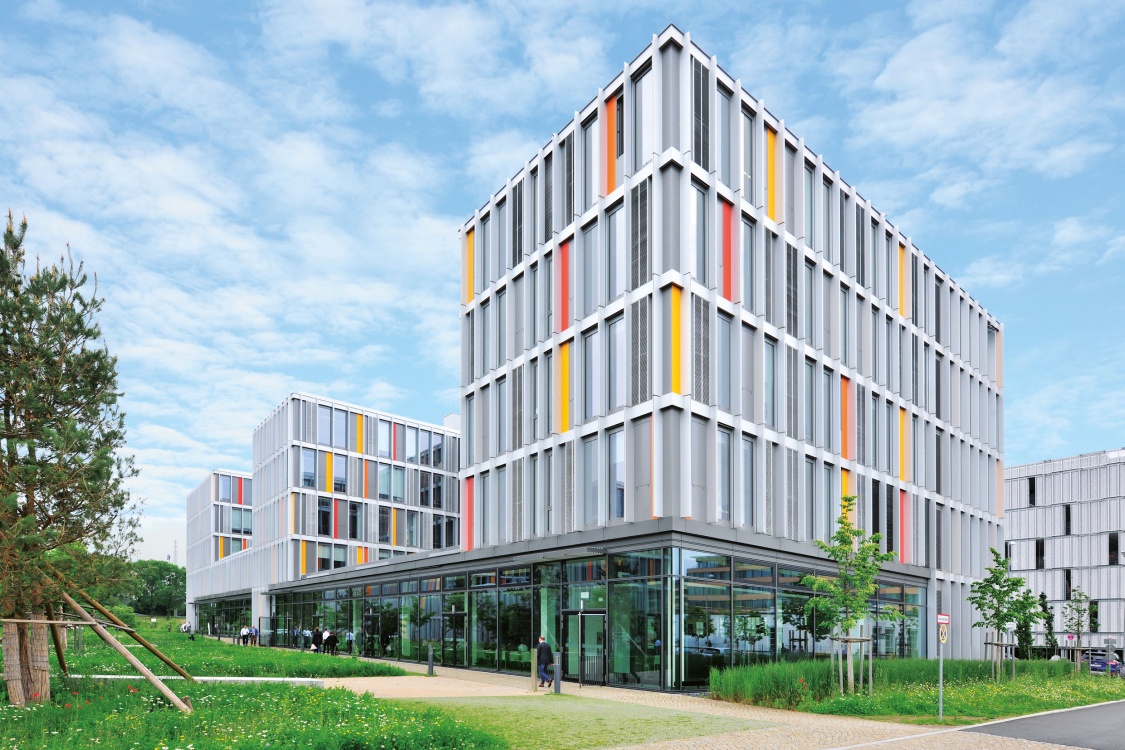 Built for the future

In order to bring a large part of the city’s information and telecommunications technology under one roof, the Stadtwerke München (SWM) Munich City Utilities commissioned the building of an ‘IT townhall’ – the IT-Rathaus. The building complex is located on the premises of SWM’s Campus M technology park. The site was to be as future-oriented as the IT structure of the Bavarian capital; a hard-wearing dewatering system was needed for the façades, entrances and steps, which would reliably collect rainwater and direct it away. Since the main entrances accommodate a high amount of vehicle traffic, components that would withstand these high loads were to be used. The combination of channels and gratings from Richard Brink GmbH & Co. KG meets this requirement. The metal products manufacturer delivered both the Stabile Magna dewatering channels and corresponding heavy-duty longitudinal bar gratings as well as slotted channels, all of which were custom-made for the system to optimally suit the façade elements.

Munich’s Campus M quarter comprises four different development fields that have been implemented in recent years. The buildings face the central green campus axis, which affords a view of the Olympic Park and links the existing biotopes to the east and west. Beyond the open space, bands of concrete slabs pave the way between the various peripheral developments. Extensive grassland areas planted with sparse, nutrient-poor grass and solitary pines with multiple trunks reveal a raw, untouched character.

The new IT-Rathaus is a continuation of the existing building structure. Right next to the SWM premises, a complex has come into being where SWM’s own company it@M is based as the central IT service provider for the municipal authorities. The IT-Rathaus in Munich was built on a plot measuring around 38,000 m2. It forms the eastern end of Campus M. As the IT-Rathaus is situated directly next to the technology park's natural surroundings, the project designers, architecture firm Glück Landschaftsarchitektur BDLA from Stuttgart, chose plants for the plot that would complement the local environment. The theme for the design of the building environs is the ‘Munich gravel plain’: a gravel landscape has been developed here that characterises the transitions, with just a slight hint of a green belt. This belt concept is also seen in various inner courtyards. Buxbaum hedges and dogwoods shape the evergreen base made up of shrubs and grasses. Plant boxes accentuate the entrances. Vertical grey and coloured metal slats give the buildings’ façades their character. They represent a barcode and symbolise the activities of the IT service provider taking place inside the building. Clear geometric shapes also define the look of the buildings.

In order to reliably drain away precipitation in the façade area of the IT-Rathaus, landscape architects from RSP Freiraum GmbH, Dresden, planned an extensive dewatering system. Among other things, channels that visually match the other materials used in the building project were to reliably collect rainwater in front of the floor-length windows, the doors and the steps. Products with a high degree of stability were required as the dewatering elements, especially those at the kitchen entrance on the south side, are exposed to heavy loads from delivery vehicles. The channels at the main entrances also need to withstand heavier loads as forklift trucks often pass over them.

Stainless steel and hot-dip galvanised steel dewatering systems from Richard Brink were able to meet these challenges. Stabile Magna dewatering channels were chosen for the job. These channels are specially designed for heavy-duty use. Heavy-duty longitudinal bar gratings were also used, with a bar thickness of 20 x 3 mm, as covers for the channels. At the entrances, the dewatering solutions meet load class C 250, and at the kitchen entrances they even go as high as class D 400. The channels have an inlet width of 153 mm with nominal widths of DN 100 or 203 mm and DN 150. The metal products manufacturer customised the lengths of the channels and gratings so they would match the door reveals perfectly. The fact that the workers from Gzimi – Garten- und Landschaftsbau GmbH did not have to cut these components down to size at the building site meant that valuable time was saved in the installation process.

The channel bodies are perforated on the underside and on the side opposite the building in order for the façade water to soak away immediately. Drainage concrete directly absorbs the moisture. Plastic pipes on the channels also lead down to the base layers. Stainless steel point drainage units complete the channels and gratings, some of them with dirt traps. Longitudinal bar gully gratings made of hot-dip galvanised steel cover the units.

Lamina slotted channels that run in parallel also provide sufficient dewatering in front of the entrances. In total, 107 running metres of these channels were laid. They have a total height of 260 mm and a collar height of 160 mm. Connected inspection and flush boxes allow for optimal cleaning of the channels. Since they are covered with the surrounding slab material, a uniform look is achieved.

Thanks to their discreet design, the dewatering solutions can be combined with the different ground surface materials used at the IT-Rathaus. While granite paving was laid at the entrances, concrete slabs were used in the courtyards. Coarse gravel fills edge the façades. Exposed concrete slabs on the central green belts with a water-bound coating connect the individual buildings.

The green campus belt between the buildings also helps with water absorption: a system of drainage trenches was installed at the IT-Rathaus which collects and absorbs water from fixed surfaces and roof outlets. Together with the dewatering channels from Richard Brink, an extensive system is formed, which permanently protects Campus M from moisture damage.