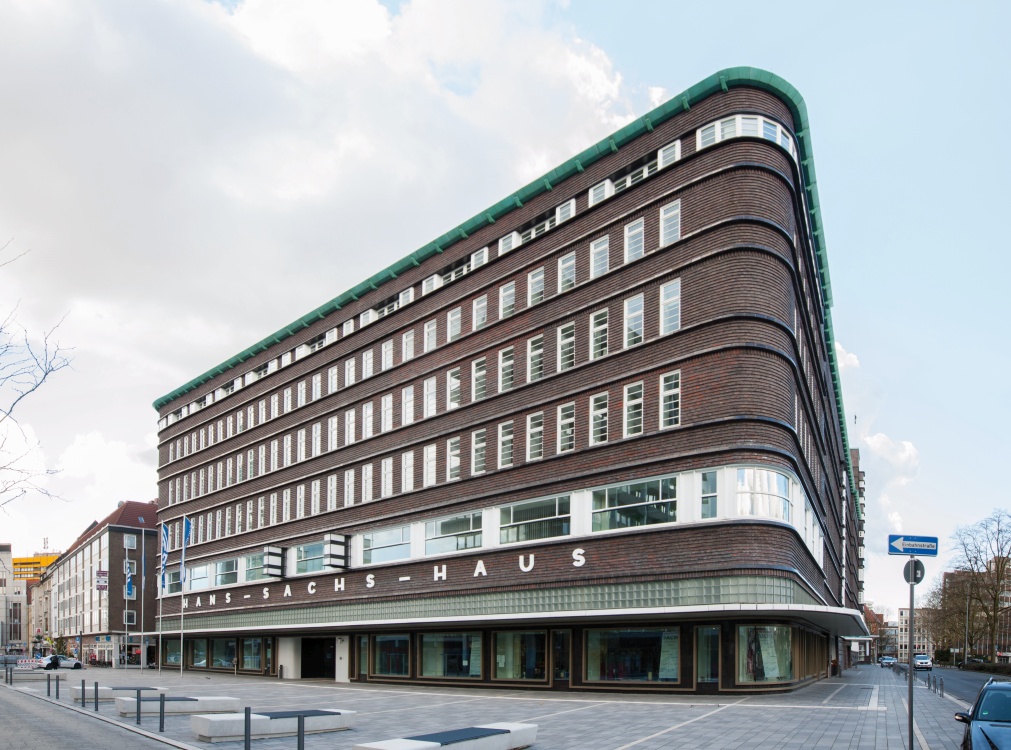 Discreet drainage for a large space

Gelsenkirchen’s new town hall, the Hans-Sachs-Haus, functions as a central point of contact for the town’s residents and makes a distinctive mark on the townscape. To provide efficient drainage of precipitation from the neighbouring 2,200 square metre Alfred Fischer Square, a discreet line drainage solution with custom-made slotted channels and inspection boxes from Richard Brink was used. Richard Brink also supplied solidly built dewatering channels and mesh gratings made of stainless steel for draining the façade. Since the square and the entrance to the public plaza on the ground floor of the Hans-Sachs-Haus would be loaded with a weight of up to 35 tonnes, all of the channels used were supplied as heavy-duty versions. The 1920s building was re-erected over a construction period of about four years, following the plans of architects from Gerkan, Marg and Partner (gmp) and retaining the existing façades. The outdoor facilities were designed by Berlin landscape architectural firm Rainer Schmidt Landschaftsarchitekten and executed by Garten- und Landschaftsbau Vornholt GmbH.

With its combination of a historical solid clinker-brick façade and notched full-length glass façade, the Hans-Sachs-Haus is a distinctive landmark in Gelsenkirchen’s city centre. Its five storeys house the council chamber, event rooms, city administration offices, a tourist information point and service facilities for the city's residents, amongst other things. The existing façades were retained during construction, while the interior of the building was completely restructured. The architects carefully integrated the resulting glass atrium of the new building into the historic building shell made of clinker bricks.

The Hans-Sachs-Haus takes a new shine

The redesign of the Hans-Sachs-Haus facilitates a dialogue between two building styles: the listed clinker-brick façade puts forth a clear artistic image, especially on the side with the main entrance. Ornamental brick elements and the multi-coloured interplay of the clinker bricks accentuate the structure and break through the functional approaches of the new objectivity style of the 1920s. The integrated new building opens to the rear with a large glass façade facing Alfred Fischer Square, successfully conveying the message of providing public transparency in the democratic decision-making processes taking place inside. Horizontal sun protection slats structure the glass façade and lend a sense of continuity with the cornice bands of the historic building. To emphasise the particular charm of the Hans-Sachs-Haus, the architects reconstructed a number of historical elements such as the shop windows on the Hauptstrasse and the stairways.

Designated as the public square for the town hall, Alfred Fischer Square was created by tearing down the extension building and removing a street to accommodate the 2,200 square metre space. The forecourt and the neighbouring public paths are designed for easy disabled access and feature a guidance system for the seeing impaired, amongst other things. The transition between the pedestrian paths and the square is smooth and barrier-free. This change is visually demarcated by different coloured concrete slabs laid in the opposite direction to the slabs of the paths. The west-facing façade can be opened when the weather is good to allow for shared use of the square and the public plaza on the ground floor of the building. The newly created square had to be able to accommodate a weight of up to 35 tonnes in order to be used for events. This requirement also affected the selection of the dewatering systems. To drain the large public square as discreetly as possible, the landscape architects chose a line dewatering solution. Custom-made heavy-duty Lamina channels and suitable inspection boxes from Richard Brink GmbH & Co. KG were used. Thanks to their special structure and the thickness of the material, these products can withstand the enormous compressive and shear forces introduced by cars and HGVs without sustaining function-impairing damage. At the same time, large volumes of water called for channels with special cross-sections, which were custom-made for this purpose.

In addition to the functionality and resilience of the drainage channels and dewatering systems, the design specifications of the landscape architects also played an important role in the implementation of this project. To optimally integrate the edges of the slotted channels into the installed concrete slabs, Richard Brink customised these elements. According to the garden and landscaping firm responsible for project execution, Richard Brink responded flexibly to changed requirements in the course of construction and manufactured and supplied the channels quickly and efficiently. The installed inspection boxes for cleaning the dewatering system are fitted with covers designed for paved surfaces that retain the homogeneous appearance of the ground. The boxes are therefore hardly noticeable in the overall appearance of the square.

Family-run company Richard Brink installed Stabile dewatering channels with an inlet width of 200 millimetres along the glass façade of the Hans-Sachs-Haus. The mesh format and solid-built structure of the cover gratings for the dewatering channels follow the architectural line of the different façade elements and lend continuity to the design. The channels used throughout the project meet the requirements for barrier-free access, ideally implemented along with a guidance system for the seeing impaired and other elements in the outdoor areas and the building.