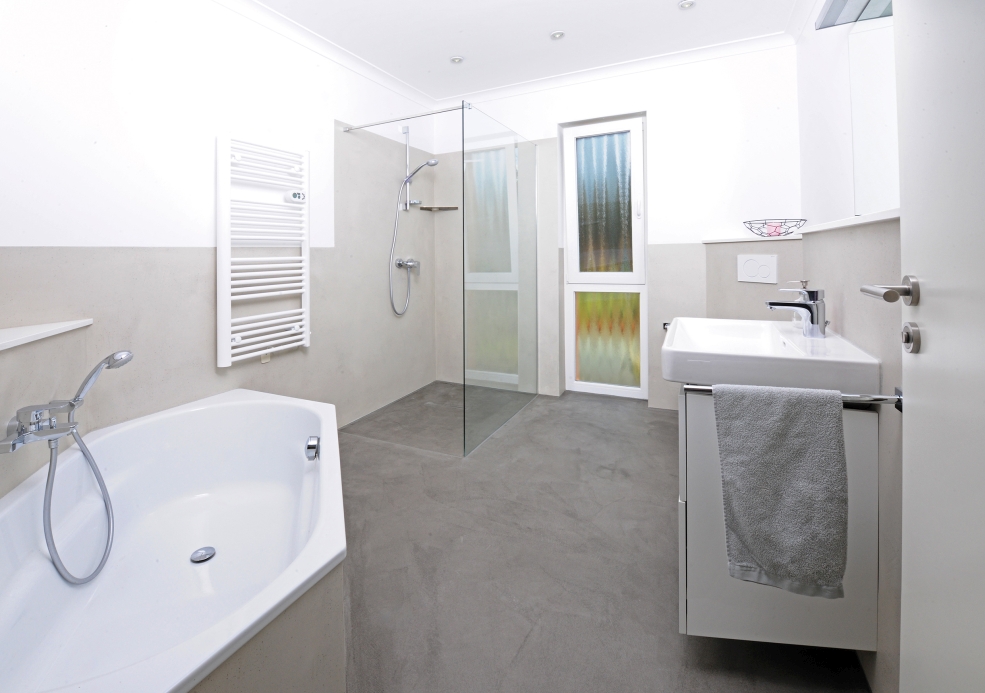 Richard Brink’s “Atrium” shower tray provides a watertight, complete system and is an ideal solution for anyone looking for reliable, user-friendly products for the shower area. The advantages of its modular design and straightforward handling were recently highlighted in two demanding renovations carried out not far from the headquarters of the metal products manufacturer.

A dewatering solution that is not only functional but also aesthetically pleasing requires well-designed, compatible components that slot together effortlessly. In shower areas in particular, it is also vital that every component is fully and durably watertight. Richard Brink ticks all these boxes with its “Atrium” shower tray, a complete solution that provides the tray, welded entirely from stainless steel, together with the wall and floor connections as a single component. The board, seal, sound insulation and self-adjusted gradient are also included, creating a single system of precisely-fitting components that makes installation a breeze.

A cut above the rest

With these features, the “Atrium” model also caught the attention of company Bürmann & Sohn GmbH from the town of Schloss Holte-Stukenbrock in North Rhine-Westphalia. The specialised painting contractor was hired to renovate two private bathrooms, which included modernising the shower areas. They wanted to create floor-level shower units that would slot seamlessly into the rest of the floor area. The shower trays would be key here: “We compared a range of products from various competitors before settling on the solutions provided by Richard Brink. Besides being easy to assemble, we were especially impressed by how watertight and reliable the system is,” says Managing Director Andre Bürmann.

In terms of overall look and finish, he and his team had been given two very different briefs: the first bathroom was to have a more rustic appearance, with striking design elements that give it an industrial feel. With this in mind, the colleagues at Bürmann & Sohn GmbH created an artificial rust effect on the floor and walls, which were then fully sealed. The second bathroom appeals with a timeless, sophisticated look in muted grey tones that run from the screed to halfway up the wall and bring together the generous bathtub, sink and under sink cabinet, making for a flawless aesthetic.

Both projects incorporate modern shower cubicles which, with the exception of the drain, transition almost invisibly into the smooth surface of the floor. Richard Brink’s “Atrium” tray helped achieve this seamless finish quickly and without complications. In just a couple of steps, the shower area was watertight, barrier-free and ready to go.

First, the siphon was connected to the drainage pipe. The installers then fitted the all-in-one unit comprising the XPS substructure, sound insulation mat, shower tray, pre-mounted sealing strips and gradient wedges into the recess in the screed, before filling the remaining space between the board and the floor with additional screed. Next, they affixed the sealing strips, which had been attached at the factory, to the floor and adjacent wall sections in order to create waterproof transitions. Waterproof sealing was then applied up to and over the shower board’s sealing strips. Rather than using tiles, the installers applied a fast-setting screed to the gradient wedges, which had already been coated with a mineral substance. The final stage was to finish the flooring: a special plastering system was used that guarantees a resilient and permanently watertight coating.

After successfully installing the “Atrium” system in both bathrooms, Andre Bürmann spoke positively of the solution and was impressed by the quality and functionality of the shower trays: “The products were made to measure and are of an excellent quality. Assembly was a breeze, with additional sealing work required only around the edges, which made our job much easier. We can absolutely recommend the dewatering solution and will definitely use it again in future projects in order to attain the best possible result for our customers.”