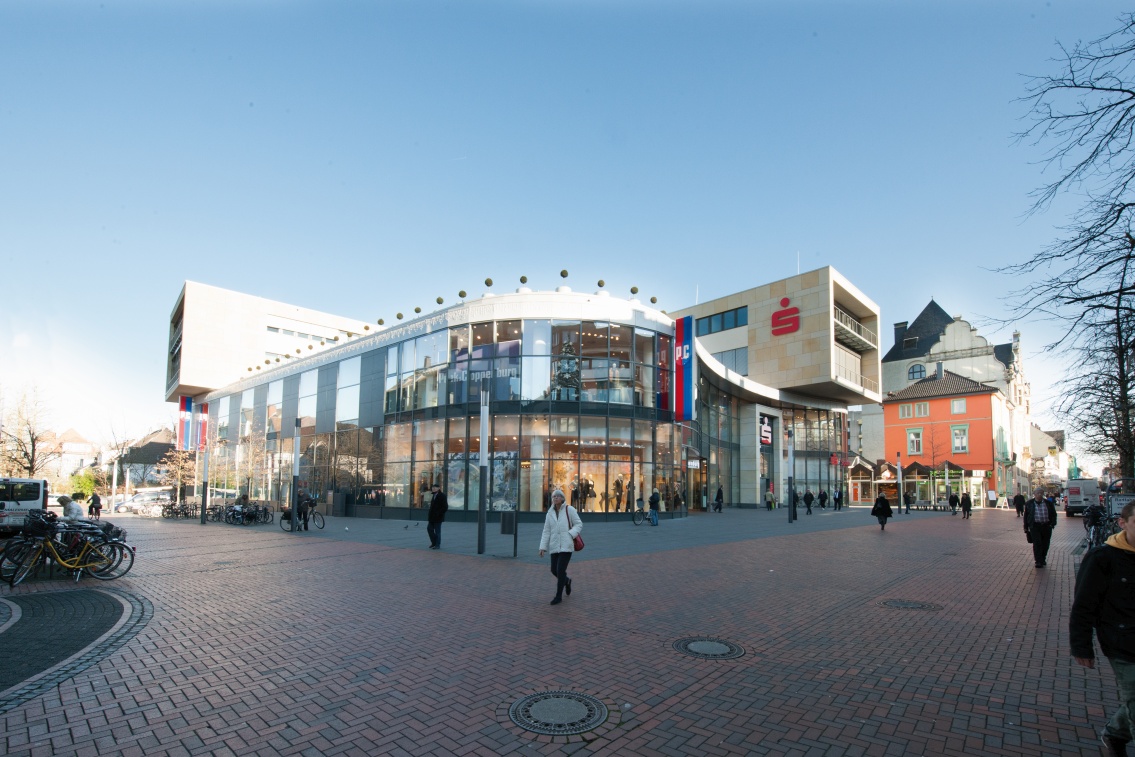 With its light-flooded new building and 120 employees, the Sparkasse Hilden-Ratingen-Velbert makes a striking new addition to Hilden’s town centre. One special feature of this edifice is its barrier-free access. This is evident in features such as the special cash machines for wheelchair users and the visually impaired and the access routes into the building. Creating step-free access whilst also protecting the building against precipitation required a dewatering system with a low installation height. The dewatering channels from Richard Brink GmbH & Co. KG, which feature stainless steel gratings and circular perforations, have a sophisticated finish.

As it was no longer economical to keep renovating their old headquarters, the Sparkasse Hilden-Ratingen-Velbert opted to construct a new building instead. The aim was to create a ‘modern, forward-looking building that brings out the best of its urban setting, whilst also living up to its top location in the heart of Hilden,’ says Norbert Kausche of the construction branch of the Sparkasse Hilden-Ratingen-Velbert. The Sparkasse headquarters and its underground car park were finally completed after a construction period of around two and a half years.

One key element of the building is its barrier-free access from the forecourt and the parking block. Most of the through-routes are controlled by automatic doors or electric door-opening devices. Visually impaired visitors can avail themselves of tactile signs and acoustic aids at the machines in the 1,400 square metre customer hall and in the lifts. There was a particular focus on the design of the threshold-free entrance area, which features especially resilient materials and dewatering systems from Richard Brink GmbH & Co. KG. Both the channel bodies and the cover gratings were reinforced with materials in order to withstand daily use by visitors as well as parcel trucks and forklifts.

Recyclable materials such as concrete, glass and aluminium were predominantly used in the construction of the Hilden headquarters. The façade of the attached building, which houses offices, is adorned with Warthauer sandstone. The façade of the 19 metre stair tower is made of ceramic tiles covered in recycled glass. This green approach is also evident in the building’s energy use. Electricity is supplied by a modern combined heat and power plant, with the waste heat used to provide heating and cooling ceilings. A 26 kW photovoltaic system as well as energy-saving bulbs and presence detectors in the offices are other examples of the green building concept.

In addition to the new building, the entire outdoor area, including Ellen-Wiederhold-Platz, has undergone a redesign. Düsseldorf-based landscape architects from FSWLA were in charge of the planning. As the square is an open urban area that offers space for events and other activities, it was designed with functionality in mind. The new building is surrounded by linear concrete block paving of different sizes. Rosenkranz GmbH & Co. KG, a Velbert-based landscaping firm, carried out the work on the outdoor area. Custom-made dewatering channels by Richard Brink GmbH & Co. KG were used to divert any precipitation into the drainage system. As the façade channels running around the building required specific shaping, there was a need for custom detailing and items made to specification. The workmen installed around 150 metres of dewatering channels in total.

The stainless steel gratings supplied by Richard Brink feature circular perforations with an 8.5 millimetre diameter. This type of grating was chosen as it complements the look of the smooth paving surface and structure, while also fulfilling its dewatering function. The perforated design also prevents the channels from becoming contaminated with city refuse too quickly. ‘We chose Richard Brink for its reputation of executing projects efficiently, whether they involve standalone estimates or coordinated delivery dates. Another major factor in the decision was the cost-effectiveness of the product,’ says Rüdiger Scheiermann, construction foreman from Rosenkranz GmbH & Co KG for garden design, landscaping and sports ground construction.