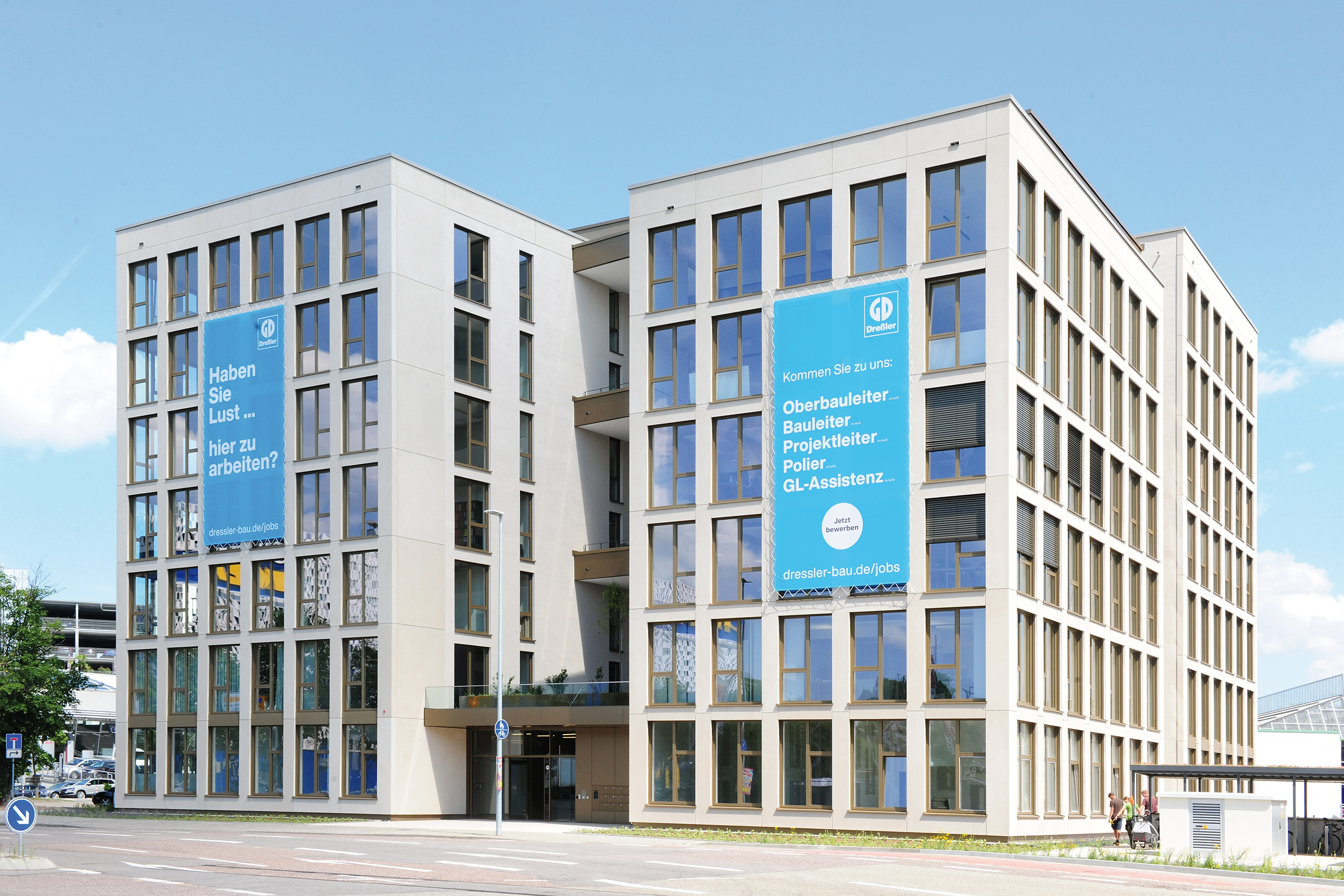 Modular, inside and out

Karlsruhe, 10/04/2022. Karlsruhe wholesale market is now home to a state-of-the-art office complex boasting impressive architecture and top energy efficiency. The striking CarlsCube stands out, among other things, for its modular construction. This is reflected also in the details: modular raised beds from the company Richard Brink, for example, enhance the inviting feel of several landscaped terrace areas. Dewatering solutions from the metal products manufacturer are also used in the open spaces.

With its light-coloured façade structure in a decorative grid design, the CarlsCube rises prominently from the western corner of Karlsruhe’s old market grounds. Together with its well-balanced geometric form, it has an innately distinctive design, shaped by not only the structure’s visual appearance, but also its harmonious overall concept.

The complex satisfies all the requirements of company Dreßler Bauträger GmbH, which is both building contractor and also tenant in this project after relocating from its former office in Rastatt to the CarlsCube in Karlsruhe, where it occupies the first floor. “As building contractor, it was important for us to establish a landmark in Karlsruhe’s new up-and-coming area that showcases the entire breadth of our service portfolio – from property development to turnkey construction right through to letting. As a tenant, we wanted to move into an innovative, high-tech building that offers a modern IT infrastructure, enables flexibility in terms of layout, and places value on high standards when it comes to energy efficiency and sustainability,” explains Julian Graßhoff from Dreßler Bauträger GmbH.

Built with sustainability in mind

The architects responsible for the project at archis Architekten + Ingenieure GmbH packed all of these needs into the seven-storey office building that takes the shape of a regular hexahedron. Its basic form is divided into four individual, partly asymmetric volumes. A set-back structural shell forms the core of the complex and is home to an open foyer that connects the different building sections. The façade made from architectural concrete – developed by the client itself – masterfully highlights the versatility of competences on offer at Dreßler Bauträger GmbH: the company produced a total of 258 façade elements out of architectural concrete for the project at its production facility in Stockstadt am Main. These elements stand out due to their unique structure and surface properties.

Inside the four sections of the building, office spaces ranging from 250 to 1,200 square metres in size can be flexibly configured to function as open space solutions or enclosed single, double or group offices. The technical building services were also planned and implemented in line with this modern feel. For example, the CarlsCube features a ventilation system that is coupled with a highly efficient heat recovery system, a climatic floor system, a charging infrastructure for electric vehicles and photovoltaic panels on the roof areas.

Planting and dewatering solutions that meet the highest standards

Furthermore, all roof surfaces were extensively planted, enabling them to double as retention areas and create an additional climate buffer that runs over the ceiling of the building’s top floor. Attractive landscaped terrace areas, which alternate in their positioning between the north and south sides of the complex and allow more daylight to flow into the different levels, were to be incorporated into the project. The team from archis Architekten + Ingenieure GmbH also wanted to install raised beds on two outdoor areas of the first floor. The company flor-design Dach GmbH from Freiburg im Breisgau was commissioned to bring these plans to life. The experts for landscape gardening as well as roof and wall planting were entrusted to assemble the raised beds as well as plant the roof spaces, lay the slab flooring and install the dewatering solutions. Based on their many years of positive collaboration, the installers chose to use products from Richard Brink GmbH & Co. KG when deciding on the right drainage channels, gullies and planting systems. “As with past projects, we again placed a lot of emphasis on high-quality products that offer an equally high level of dimensional accuracy. The company Richard Brink supplied precisely fitting products that kept assembly time to a minimum,” says Martin Schwarte, certified construction technician at flor-design Dach GmbH.

The metal products manufacturer produced a total of 93 metres of its stainless steel Stabile drainage channels as well as 20 drainage gullies for the project. Topped with matching longitudinal bar gratings, also made from stainless steel, the channels ensure reliable dewatering along the terraces’ glass fronts. On top of this, the gullies also support the drainage of accumulating rainfall in the two exposed, large-scale raised beds. For the beds, Richard Brink supplied a total of 67 metres of custom walls made from COR-TEN steel with a material thickness of 4 mm and a total height of 700 mm. The modular construction found on the building façade continues into the planting systems: the individual, made-to-measure products and the plug-in module system were quick and easy to assemble. After connecting the respective elements, they simply had to be screwed together. From a height of 400 mm upwards, the metal products manufacturer recommends the use of tie rods, which are then provided as standard. Moreover, backward bends and gusset plates give the planting systems the level of stability they need. This prevents the raised beds from buckling, which can otherwise be caused by the heavy weight of the planting soil.

While the landscape gardeners from flor-design Dach GmbH emphasised not only the products’ perfect fit but also the sound and solution-oriented cooperation, the client was particularly impressed with the heightened comfort of the terrace areas. This was achieved not least by integrating several seats in one of the raised beds, with the front of each seat aligned with the bed wall. “Nowadays, landscaped buildings are a firm fixture in urban and building planning. Adding greenery to a building – whether on the façades, terraces, outdoor areas or roofs – generally enhances the appeal of a building. By opting to install the raised beds at the CarlsCube, employees can enjoy a view of nature rather than of the nearby parking areas or bare roofs of the surrounding buildings,” concludes Julian Graßhoff.