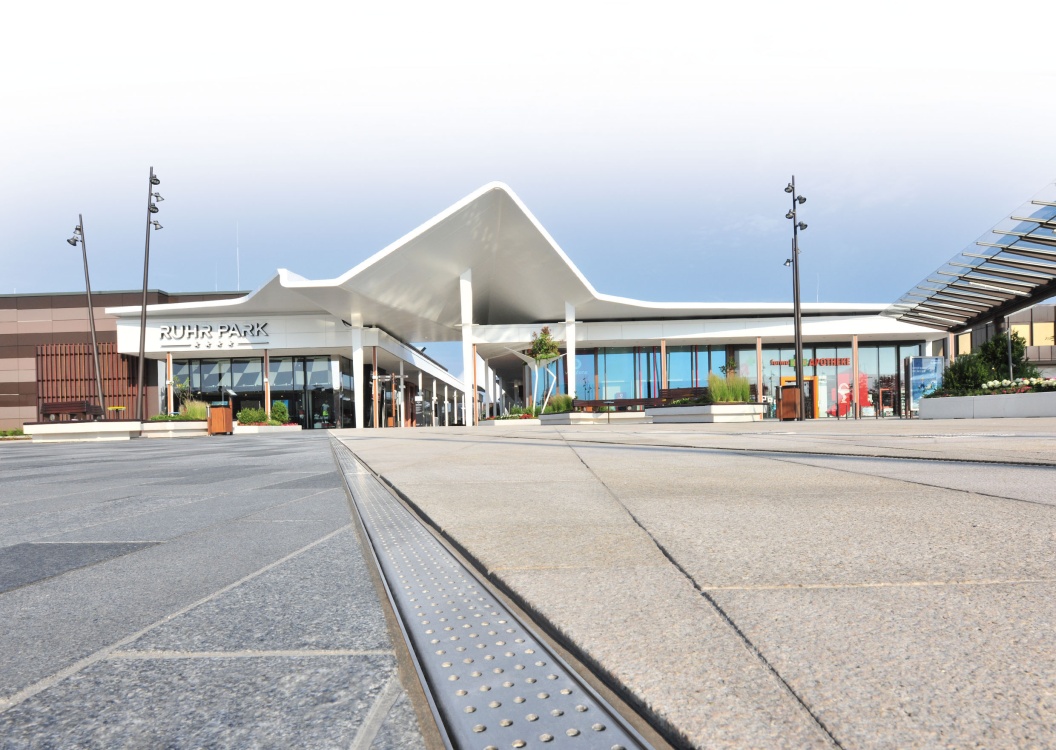 The longest stretch ever of Richard Brink dewatering channels was installed in Ruhr Park Bochum shopping centre. Altogether the products in their various designs result in a length of more than four kilometres. One of the products used were the heavy-duty Stabile Magna channels, which were made to measure and installed in the pedestrian area of the shopping centre. These channels meet load class D 400 and are therefore able to withstand even the heavy forces of transport vehicles. The channels were also used on the façades of all the buildings. The entire dewatering system is covered by 118 stainless steel gratings with round perforations, resulting in a visually uniform and striking look.

As the largest open-air shopping centre in Germany, Ruhr Park in north-eastern Bochum was recently reopened after two years of planning and implementation. More than 150 businesses come together to create a world of experiences across the 245,000 m2 area. The shopping centre serves 3.6 million people from the local Ruhr district.

The shopping centre is the second oldest in Germany, and the complex has undergone multiple construction changes since its inauguration in 1964. In this latest effort to modernise the premises, the operator has stayed true to the original concept of open-air shopping across one level. The elaborate tent roof continues to be a landmark for the area. An oval construction with a futuristic cover connects to the tower-like tent structure. Pedestrian paths project out from this new central point, the ‘fashion loop’, in a star shape.

In addition to redesigning all of the installations, new paving also formed part of the renovations. Granite stone in shades of yellow and grey was laid across 20,000 m2 to create a modern look. In order to ensure reliable drainage of the area, channels were needed that could also withstand heavy loads from transport vehicles. These vehicles use the access roads to supply goods to the businesses there. At the same time, the dewatering system needed to suit the design of the paths and façades and ensure barrier-free access to the shops. For some sections, channel bodies in custom dimensions were required that would fit the water-permeable flooring perfectly.

To meet these requirements, architecture firm GTL Landschaftsarchitekten from Düsseldorf included dewatering channels from Richard Brink GmbH & Co. KG in its designs. ‘The products meet all of the demands: they are available in large quantities, even in custom dimensions; they meet different load classes and they still facilitate a uniform design,’ says Markus Gnüchtel from GTL, summarising the main advantages of the channels.

Richard Brink delivered Stabile Magna dewatering channels for the heavy-duty area, which can withstand loads of up to 40 t. Gratings made of 3 mm thick stainless steel were used as covers, with small, round drainage perforations to prevent slender heels from getting caught. Ultimately customer safety and satisfaction were the most important considerations, according to Markus Gnüchtel. The elements adopt the complex joint structure of the floor by following its course. A combination of channels and gratings with the same aesthetics was used at the edges of the pedestrian paths. They line up flush with the adjacent flooring of the entrances to the individual businesses, giving shoppers barrier-free access, even with pushchairs, wheelchairs or walking frames. The systems also drain away rainwater from the outdoor children’s areas. The play areas are fitted with rubber granulate tracks from which precipitation is drained away into the sewer system.

Richard Brink also manufactured 51 custom-made stainless steel shaft covers for Ruhr Park, measuring 770 × 770 mm. The company produced the covers as stone inlays, where workers placed the slab material of the surrounding pavement to create a uniform look throughout. The stainless steel sets elegant accents at the edges of the cover and the corners where there are removal holes.

Thanks to the harmonious combination of the natural stone material and dewatering technology, the paths and spaces of Ruhr Park Bochum underwent fundamental changes in their design. Custom-made products were of great benefit during installation on the large building site. Visitors benefit from the reliable drainage of rainwater and are able to enjoy their time at the open-air shopping centre.