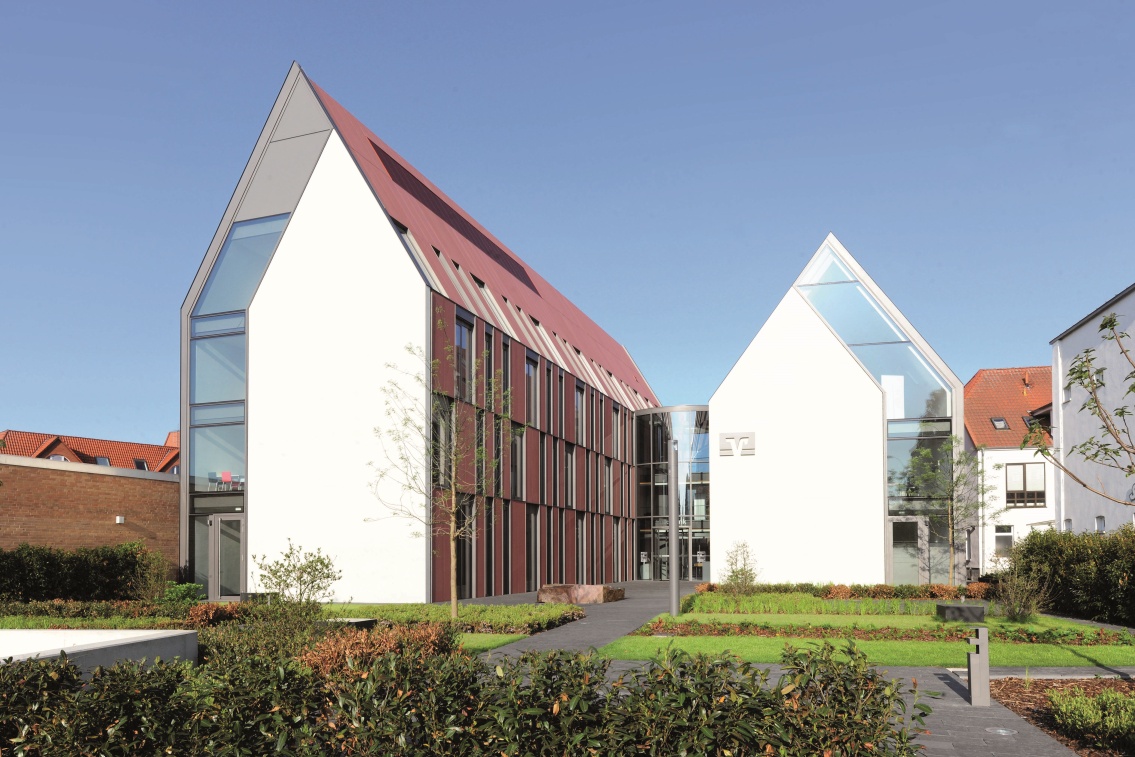 Volksbank Braunschweig Wolfsburg has erected a new building in the pedestrian zone of Gifhorn, an administrative district in Lower Saxony. The main challenge for the project was finding a way to integrate the building, designed by Stephan Braunfels Architekten, into its diverse surroundings. The result is two gable-topped wings with glass and exposed concrete façades, joined by a rotunda. The outdoor areas were designed by landscape architectural firm Frank Kiessling Landschaftsarchitekten and the work was carried out by Delle und Heinemann GbR. As the rotunda required a precisely-fitting dewatering solution, the landscape architects opted for a custom-made drainage system by Richard Brink GmbH & Co. KG. Together with the Hydra Linearis stainless steel grating, winner of a design award, these provide the building with a stylish edging and reliably drain away precipitation.

As the old building, which dated from the 1980s, was no longer suitable, Volksbank Braunschweig Wolfsburg made the decision to demolish it altogether. Given that the site lay between an old, yellow, three-storey building with a hipped roof on its left and a four-storey, flat-roofed brick building on its right, the aim was to design a building that suited this disparate setting whilst also adding to the attractive cityscape. The new centre for finance and services, which has a gross floor area of 3,500 square metres, opened in January 2012 following a construction period of just under two years.

The new building by architectural firm Stephan Braunfels Architekten consists of two gable-ended three and four-storey wings. These are positioned at an acute angle and joined by a rotunda. By paring the design back to the basic elements of gables, roof cladding and lanes, the architects provide a continuum with the composition of the historical houses that were once home to a farming community.
The gable-sided façade is distinguished by a large, light exposed concrete expanse and ribbon windows that go all the way up to the roof ridge. The long façade and the adjacent roof surfaces, which feature offset windows, are clad in brick-red elements, creating a dynamic contrast with the large, blank expanse of the gable walls.

A marketplace for customers

Volksbank’s light-flooded ‘marketplace’ can be found in the rotunda, where customers can withdraw money around the clock or access their deposit boxes. Volksbank aims to offer customers financial services here, along with other advice services relating to legal matters, tax and insurance, all under one roof. As such, the bank has let out about a quarter of the total office space to suitable service providers. The interior is also defined by exposed concrete and steel elements. Narrow floor-to-ceiling windows let daylight into the offices, which are staffed by 35 employees and are positioned around the inner courtyard. Over the long term, the large amount of light throughout the building and the cooling and heating provided by air-heat pumps will help to reduce energy costs.

At the same time, the marketplace provides access to a small park (‘Pocketpark’) with an adjoining car park for customers. With its fountain sculpture, leafy grove and open surfaces, the Pocketpark is an attractive place to linger. This park also forms the entranceway to the marketplace for customers who have arrived by car. The positioning of the open spaces, leafy zones and lawns within the Pocketpark provides a playful echo of the building’s lines. The paving in the outdoor areas is made of dark natural stone slabs.

A targeted drainage system was required in order to preserve the building from damage caused by precipitation. The landscape designers opted for a subtle linear drainage system on the bank’s paved forecourt and in the park area. Lamina slotted channels from Richard Brink GmbH & Co. KG reliably drain the water away. On the façade, more than 100 metres of new Cubo drainage channels, featuring designer Hydra Linearis stainless steel gratings, add a touch of sophistication. The longitudinal bar gratings were distinguished with the Red Dot Design Award. The elegant grating design is also carried through to the building’s interior. Complementary stainless steel ventilation grilles in front of the office windows on the ground floor provide a visual link with the outside area. ‘Richard Brink’s channels are top quality and have been custom-made so that they fit precisely. What’s more, these covers are among the best looking gratings on the market,’ says landscape architect Frank Kiessling, explaining why he chose these products. In order to discourage theft, all of the gratings were fitted with a lock.

The complex structure of the rotunda and its entrances presented a particular challenge in terms of drainage. To address these issues, Richard Brink supplied 17 metres of custom-made Stabile channels, along with stainless steel gratings of different widths, which hug the curves of the building. ‘The rotunda looks fantastic – everything fits together perfectly. Our collaboration with Richard Brink went very smoothly. They were flexible and able to deliver quickly,’ says Robert Deller, who led the garden planning and landscaping.

The architects’ design has resulted in a prestigious new Volksbank office complex that blends harmoniously into its urban setting. Customers can identify with the building, and the pictures of the local region displayed in the consulting area are a big hit. ‘The project was technically complex and required a high standard of workmanship. Overall, we are very satisfied with how it went,’ says René Pflugmacher, Head of Facility Management at Volksbank Braunschweig Wolfsburg.