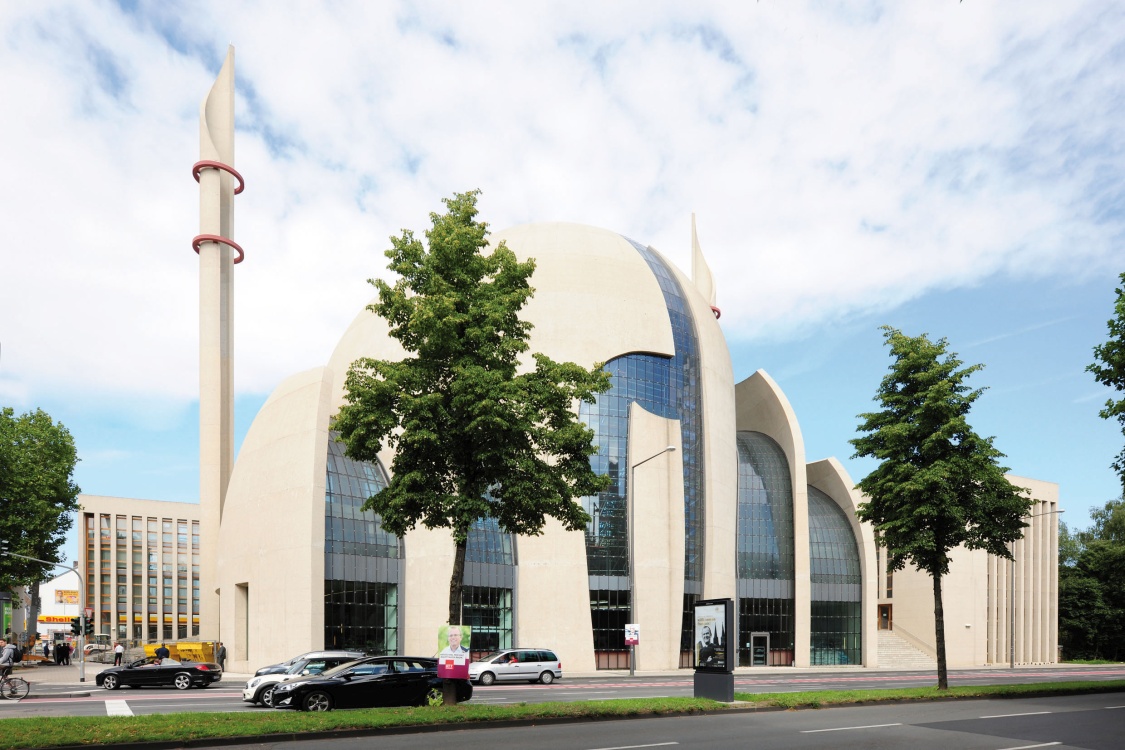 The inner square of the new DITIB Central Mosque in Cologne-Ehrenfeld serves as a meeting point for religious, social and cultural events. At the same time, it provides access to all of the functional areas of the complex. In order to ensure that precipitation is drained away from the 1,470 m2 area and the semi-dome of the neighbouring mosque building, a reliable dewatering system was needed that would also remain in keeping with the overall aesthetic of the space. Drainage channels and double-slit gratings supplied by Richard Brink GmbH & Co. KG were used to meet these requirements. The stainless steel products drain away rainwater both from the square and from in front of the façades of the surrounding buildings. The total length of 317 m of designer gratings blend in discreetly with the slab material, creating a harmonious overall look.

The major project Cologne Central Mosque arose from a desire to create more space and inviting areas. With the new building at the corner of Venloer Strasse and Innere Kanalstrasse, the Türkisch-Islamische Union e.V. (DITIB) wanted to create a representative central point that would encourage exchange and interaction. The foundation stone for the project was laid in November 2009, and the client invited stakeholders to the topping out ceremony in 2011.

The modern design of the building allows it to fit in nicely with its urban surroundings. It is based on the ideas of architects Gottfried and Paul Böhm. The 36.5 m tall dome framed by two delicate-looking minarets is certainly distinctive. The curved lines of the prayer hall, which can accommodate 1,200 worshippers, give the building facing Innere Kanalstrasse a harmonious appearance. The concrete structure achieves an airy feel through the interplay with voluminous glass fronts. The raised square of the building complex opens out to Venloer Strasse. It can be reached via two wide sets of steps connecting the two main floor levels. The square leads to the prayer hall, library, study rooms and offices. The base of the complex provides access to the youth and sports area, the conference hall and the ‘bazaar mainline’, a passage for services and shopping.

The passage runs under the square and was first sealed with a roof covering. As the building work progressed, the area was then laid with light natural stone slab material. Three different sizes of ‘Salome’ limestone slab were used. The roughened surface is non-slip. As previously there were not enough floor drains, precipitation could not be sufficiently drained away, which is why a comprehensive dewatering system needed to be integrated in the slab flooring, which would also provide reliable drainage even in the event of heavy rain. Discreet drainage was needed in order to maintain the consistency of the square’s aesthetic. Channels also needed to provide reliable drainage for the façades, especially in front of the doors that reach to floor level. The entrances are fitted with magnetic seals that ensure barrier-free access. As the doors are not raised off the floor, a dewatering solution was necessary that would prevent water from getting inside.

‘Made from one cast’

To meet the requirements, senior site manager Dieter Grah from Dresden’s IPROconsult GmbH, which has an office in the Rhineland, chose a combination of stainless steel channels and gratings from Richard Brink. ‘The look of the dewatering system was the deciding factor. The channels are almost invisible and the gratings match the natural cut edges of the limestone. The result is an even surface that looks as if it were made from one cast,’ explains Dieter Grah. Gemini double-slit gratings blend in discreetly and evenly with the slab material, virtually hiding the technology underneath. This is achieved thanks to a slab cover that can be inlaid with the same stone as the surrounding material. The Gemini gratings won the ‘Best of the Best’ Red Dot Award in 2015 for their linear and minimalist design. The stainless steel double slits set simple yet elegant accents on the square. The slotted channel gratings can be completely removed when the dewatering system is cleaned. Gullies from Richard Brink GmbH & Co. KG also make cleaning easier.

The gratings cover three main linear branches of drainage channels underneath the slab material. Since the mosque square has a gradient of two per cent, rainwater is quickly drained away towards the dewatering system. To ensure fast drainage even in heavy rain, employees from Stein und Garten GmbH, Niederkassel, installed additional channels. These channels act as inflow controls and connect the main branches of the channels under the surface. Stabile and Hydra drainage channels guide the water underground. The Hydra model is height-adjustable, which means the channels were able to be aligned precisely to the level of the flooring at each point.

The façades, especially the entrances to the prayer hall and side buildings, are also fitted with the same dewatering system. Since the system is installed level with the substrate, the area in front of the doors in particular is barrier-free.

The metal products manufacturer custom-made all of the products used, so that the dimensions match those of the square perfectly. ‘We were impressed by how adaptable the system was. It is practical, straightforward to install and easy to clean,’ summarised Dieter Grah, adding: ‘The cooperation with Richard Brink went very well.’ The collaboration resulted in an individual dewatering solution that lives up to the building complex’s functional and aesthetic demands. With its harmonious design, the mosque’s courtyard has become a representative and inviting space