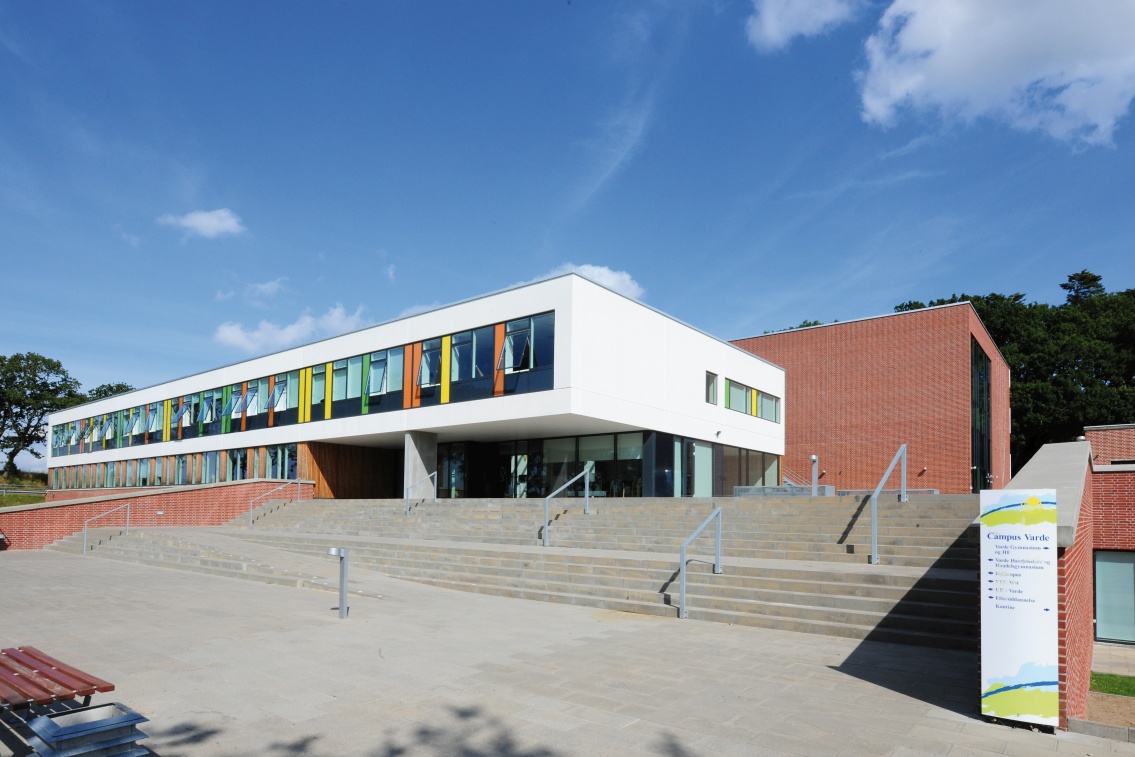 Harnessing the power of the sun

Denmark has ambitious plans for the energy transition. The aim is for 35% of end energy consumption to come from renewable energy sources by 2020. By 2050, it is hoped that the country will have made a complete switch to renewable forms of energy for everything from transport to industry. In order to prepare future generations for this change and to be as well-equipped as possible, a secondary school in the small Danish town of Varde, southwestern Jutland, has taken some initial steps. Employees from Green Force Company installed solar modules with a total output of 225 kWp on the 4,300 square metre roof surface of the school. The solar substructure by Richard Brink from Eastern Westphalia provides a secure support for the modules. The workers managed to install the aerodynamic flat roof system in just a few stages, without having to penetrate the roof cladding.

Denmark is seeking to become gradually less dependent on fossil fuels. The solar cells on the flat roof of the school in Varde play their part in working towards this goal. This region of Denmark enjoys optimal conditions for successful energy generation: with around 1,700 hours of sunshine per year, it tops Germany’s tally by roughly 150 hours. Since the installation of the modules, the subject of energy transition has joined the curriculum alongside economics, marketing and IT for the roughly 500 pupils who attend the school. Taking their own solar energy system as an example, they experience how energy can be generated and used via alternative means.

A secure support for the solar modules

In order to ensure that the school would be able to generate its own energy over a long period, the solar modules needed to be fixed to the roof securely and reliably. The project managers opted for Richard Brink’s Miralux 2 solar substructures, oriented south and slanted at a 15 degree angle. This setup ensures a high yield, in particular during the hours around midday. Thanks to an innovative surface coating, the steel frame provides the school with a robust system. In accordance with EN 1991-1-4, which has an appendix that applies to Denmark, structural engineers carried out ballasting calculations for the flat roof. As the solar substructures have already been aerodynamically optimised through wind tunnel tests, they can be used with relatively little ballast. For the ballast, Green Force Company provided specially moulded concrete weights that could be integrated seamlessly into the solar substructure. Richard Brink GmbH & Co. KG also offers ballast supports, allowing off-the-shelf sheet materials that are used as ballast to be held securely in place. The integrated cable ducts ensure that the wiring of the solar modules is safe.

The Danish Green Force Company in charge of the project first came into contact with Richard Brink GmbH & Co. KG at Intersolar 2012. The company opted for this solar substructure due to its swift and straightforward handling and small packaging dimensions. Prefabricated folding elements make the assembly considerably easier than the norm. ‘The fact that the solar substructures can be mounted onto the roof in a short time makes the system a very attractive proposition. Four workers can install modules for around 25 kWp in the space of four hours. What’s more, the fact that we didn’t have to penetrate the roof cladding in order to mount the substructures was a major factor in our decision,’ explains Per Bank Lauridsen, Logistics Manager and partner at Green Force Company. He was in charge of procuring the modules, inverters and mounting systems for the project, as well as for the overall logistics. He is very happy with his company’s collaboration with Richard Brink: ‘The company trained our employees to mount the system on site and the whole order was carried out with the utmost professionalism.’ Within two weeks, three to four employees had mounted the whole system on the roof surfaces, including modules and ballast stones.

Thanks to the newly installed solar system, which features almost 900 modules, the school produces around 220,000 kWh of electricity every year. 75% of the energy generated is used by the school itself. The other 25% is fed into the public grid, securing high government subsidies for at least ten years. Richard Brink’s next joint project with Green Force Company also supports Denmark’s progress in the energy transition: a solar system in Aarhus generating a total of 368 kWp.;