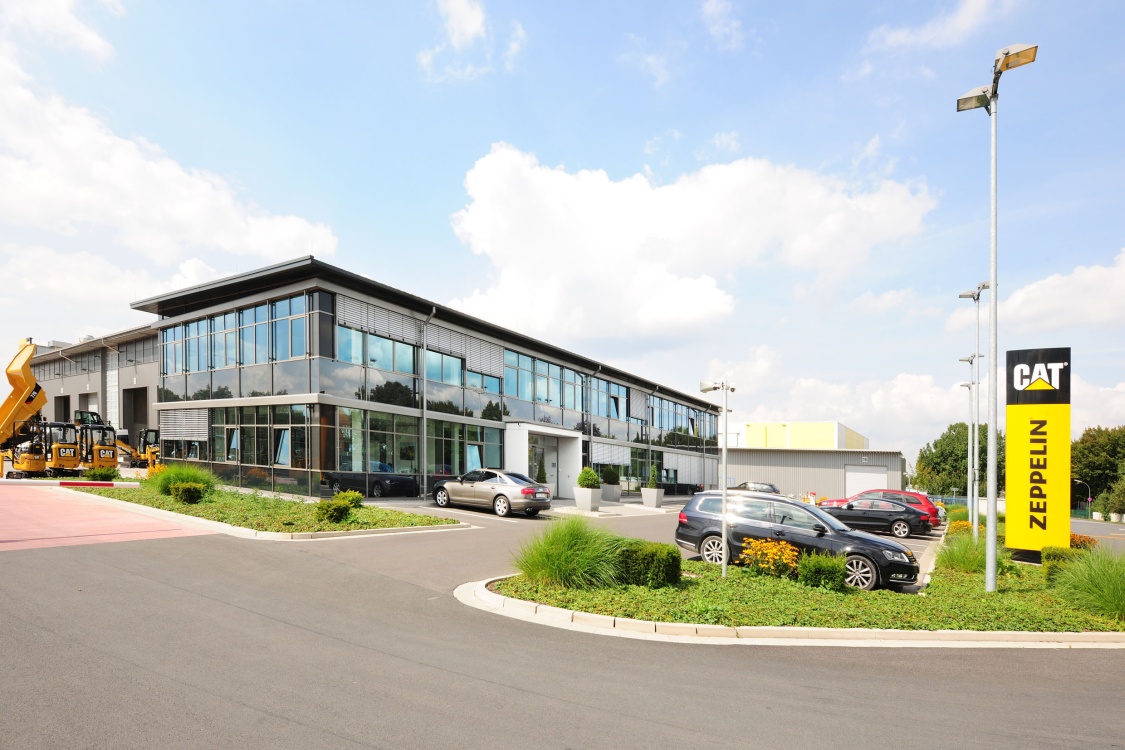 Clean lines, open structures and an effective mix of materials comprising glass, steel and concrete all give the Zeppelin Baumaschinen GmbH premises in Hamm a distinctive appearance. The new building of the distribution and service partners of Caterpillar Inc., the world’s largest construction equipment manufacturer, is defined by its striking architectural design. In order to highlight the entrance area for the main building in a fitting way, the company chose plant boxes made by Richard Brink GmbH & Co. KG as a key part of the look. The galvanised steel plant boxes blend harmoniously into the outside areas due to their powder coating in RAL dusty grey. They form a guard of honour for customers and employees as they approach the main entrance.

Zeppelin was a byword for innovation and progress as early as the beginning of the 20th century, when the firm’s founder, Ferdinand Graf von Zeppelin, thrilled the world with his airship. Today, Zeppelin Baumaschinen GmbH continues to conduct forward-looking business from its premises in various different locations. In order to keep pace with the growth of the company, the company had the building and outside areas of its 24,000 square metre site in Hamm redeveloped, while the business continued to operate around the construction works. For 51 years the company has focused on the construction machines sector.

In 2011 Zeppelin planned a redesign of the site, with help from an external architectural firm. The requirements were generous spaces and a focus on the use of materials that would ensure the stability of construction machines such as wheel loaders, crawler excavators and dump trucks. The company’s focus on its customers was also to be reflected in an imposing entrance area. In addition, the client wanted a high level of functionality and long durability. The design concept, which has been rolled out to all branches within Germany, was applied to the new site in 2013. In the main building, sales and services employees and staff from the commercial department work in large offices across two light-flooded floors. The transparent glass front reflects the company’s openness. The headquarters for North-Rhine Westphalia also incorporates a workshop, paint shop, warehouse, the rental facility for construction vehicles and a wash bay. The latter recycles water that has been used within the office building. In addition, the roof surface can store 28,000 litres of rainwater.

Not only can the interior spaces and the façade of the main building be described as lavish, but also the external areas, which were designed by Dortmund-based company Gustav Marsch. Paths lead customers and business associates from the large car park directly towards the building. Employees of Nachtigall GmbH, based in Dortmund, planned and carried out the greening of the outdoor areas. They placed four plant tubs from Richard Brink GmbH & Co. KG at the entrance to the building. Positioned as columns, the metre-high boxes create a welcoming passageway to the lower office level. To the side of the entrance are two bordered areas filled with quarry stones, drawing attention to the plant tubs. These stones also make visual reference to Zeppelin’s industrial connection. The plant holders, which are 900 x 900 millimetres at the top, taper to 600 x 600 millimetres below. Despite their angular shape, this gives them an elegant appearance. With their grey colouring, the plant tubs chime with the outline of the glass façade, creating a balanced unity. The boxes, which are made of 1.5 millimetre-thick hot-dip galvanised sheet steel and are powder-coated, can withstand the long-term effects of adverse weather.

In order to ensure that the area appears the same all year round, Nachtigall employees planted evergreen diamond-shaped topiaries in the boxes. They are protected against frost and dehydration by the double-walled, insulating structure of the boxes. Thanks to the sophisticated design of the plant boxes, they are both functional and easy to care for. The plants go with the flowerbeds in front of and beside the building. This creates a visually pleasing transition between the car park and the new building.

‘The plant tubs are perfect for our entrance area. It now has the design it merits and customers are led right to our door,’ says Kay-Achim Ziemann, Sales Director for North-Rhine Westphalia and general manager at Zeppelin Baumaschinen GmbH. He adds, ‘The overall concept has been very positively received. The redevelopment has resulted in a pleasant working environment.’ Employees and customers park in the areas in front, while flatbed truck drivers transport construction machines past the main building and into the facility behind it. Everyone who arrives here can access Zeppelin with ease, thanks to its functional and design-oriented entrance area.