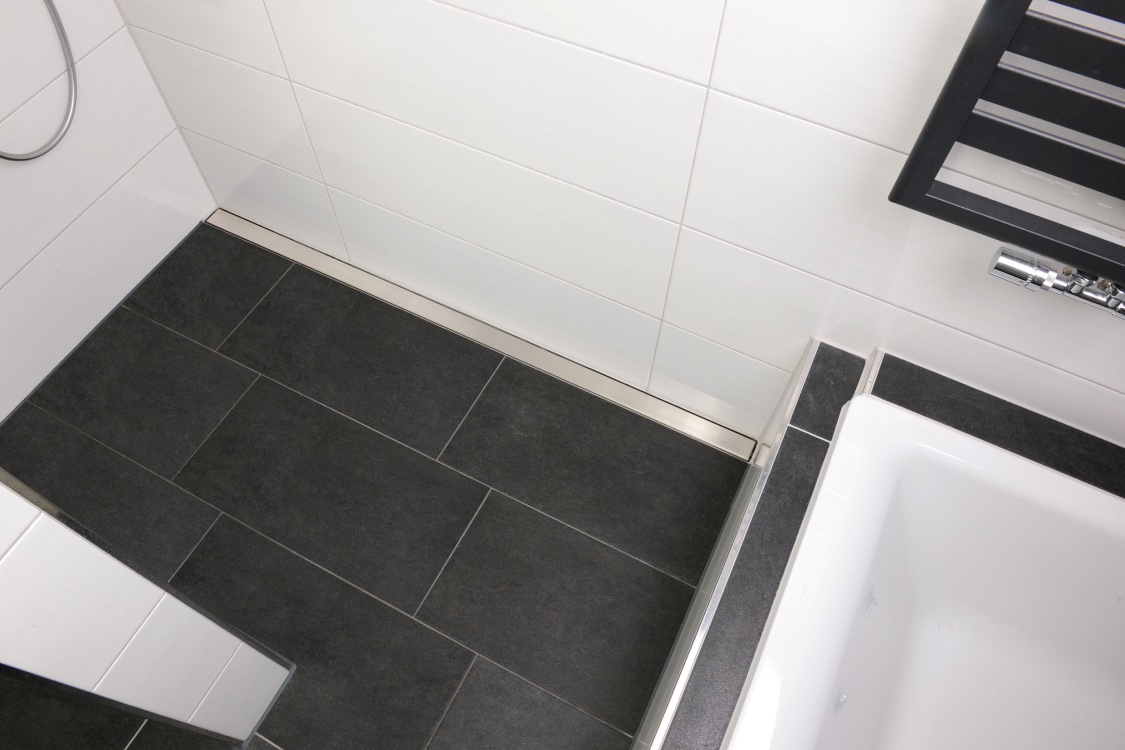 Timeless – and yet made with the future in mind: that was the design brief for the two bathrooms in a 150 m2 family home in Schloß Holte-Stukenbrock. The clients wanted architecture firm Volker Weege Planungs- und Bauleitungsbüro GmbH in Schloß Holte-Stukenbrock to design contemporary shower niches that run smooth with the floor while providing practical yet discreet water drainage. Richard Brink took care of this task using their premium stainless steel Elix shower channels, custom-made for a precise fit. They make the showers fully accessible and also provide a uniform look to the design.

Schloß Holte-Stukenbrock is a peaceful, rural town in the eastern part of the German district of Gütersloh. Dotted among the heathland that characterises this area, old timbered houses harken back to bygone eras. The River Ems springs from a nature reserve here and winds its way along the 370km route to its mouth at the North Sea. Buildings in this small town are not usually tall, blending in harmoniously with their idyllic surroundings. The clients chose this location for their two-storey family home, which was ready to move into after one year of construction. They placed special importance on making the home barrier-free and accessible, a priority that is especially reflected in the design of the two bathrooms.

The large bathroom upstairs and the guest bathroom with shower on the ground floor have a purist style. The main bathroom upstairs is light, with large-format tiling in a natural stone look that convey a timeless quality. To make optimal use of the available space, the shower was installed directly next to the bathtub. The installed Elix shower channel from Richard Brink GmbH & Co. KG follows a length of 1,680mm along the wall to the cladding of the bathtub, where the water is ultimately drained away. A shower grating with a polished surface completes the look and creates an interesting contrast to the white and anthracite-coloured tiles.

Shower area – everything made from one cast

In the guest bathroom on the ground floor, soft sand and earth tones create a peaceful, harmonious ambiance. Instead of using a stainless steel shower grating here, the clients chose a tiled tray as a cover, giving the shower area a homogeneous look as if it were ‘made from one cast’ and retaining the natural interplay of the colours in the tiling. The 1,000mm long shower channel runs slightly offset from the top end of the shower, directly between the wall and the glass partition, so that the water on both sides can drain away down a slight gradient towards the shower channel. The result is a modern look. The inlet width of the channels in both bathrooms is 70mm.

Accessibility – building with an eye to the future

The shower channels from Richard Brink ensure that the bathrooms are barrier-free and accessible. The clients explicitly had an eye to the future in the design of the home, wanting to produce not only a home with a modern interior that would suit the lifestyles of residents while they are young and fit, but also a home with long-lasting use for later years as well. The special feature of the shower channels is their precisely-fitting profile, which joins it flush to the niches in both bathrooms. With this approach, the tiling grid remains intact and the individual tiles do not have to be broken up, preserving the harmonious look of the large-format tiles in both bathrooms.

Tailor-made solutions – in the shortest time

Architecture firm Weege had already used multiple products from Richard Brink’s range in the past. Above all, the architects and clients were impressed with the option of getting tailor-made products both for new builds and existing buildings within a very short amount of time. And the residents can now enjoy bathrooms that are both attractive and functional in equal measure.