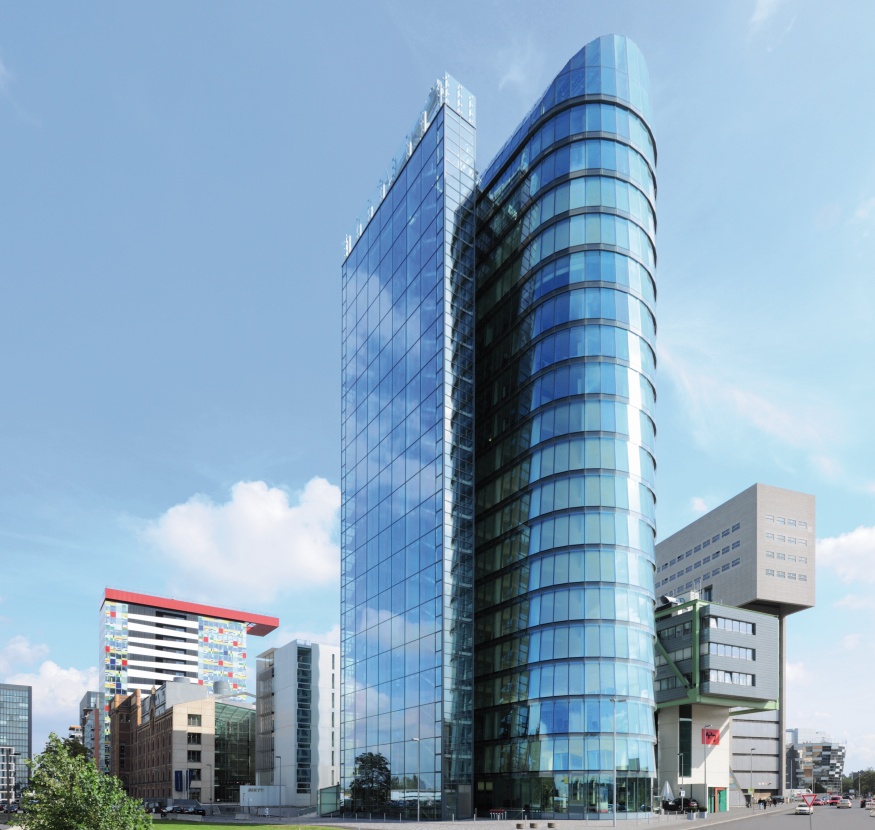 Dewatering channels provide a frame for the building

In recent years, some outstanding architectural projects have sprung up in Düsseldorf’s Medienhafen development. High-rise towers with glass façades stand side-by-side with listed buildings, shaping the overall character of this innovative commercial district. With 19 floors, rising to a height of 76 metres, Sign was designed by architectural firm Murphy/Jahn and is currently the tallest office building in this former commercial port. The all-glass façade, composed of numerous overlaid elements, is particularly striking. The slanted structure of the vast façade surface required a reliable dewatering solution to ensure that large volumes of accumulating rainwater are drained in a targeted manner. To do this, Richard Brink GmbH & Co. KG provided half-metre wide, custom-made dewatering channels with stainless steel gratings for installation around building’s edge. These not only form a stylish frame for this high-quality building, but also provide long-term protection from the effects of precipitation.

Sign forms the provisional border of the southern part of the development in the eastern harbour basin. With its subtle, streamlined contours, the high-rise forms a counterpoint to the rest of the Medienhafen development. The project’s client, Frankonia, has invested around 80 million euros in the construction of this office complex. Construction began at the end of 2007, with the first companies moving into their offices in mid-2010. In total, the building provides around 14,600m2 of gross floor space for 600 employees.

Flexible use of space

The main building, with its floor plan in the form of a rounded rectangle, has an adjoining access tower housing the stairs and lifts. Since this building does not require mid-section supports, the internal areas can be used in a particularly flexible way. The building’s centrepiece is the all-glass dome on the 19th floor, which is used to host meetings and events and offers impressive views across Düsseldorf.

With his steel and glass structure, renowned skyscraper architect Helmut Jahn has created an aesthetically pleasing yet functional office building. Sign’s architecture is characterised by its striking façade with around 1500 ceiling-high glass elements arranged in an overlapping ‘scale-like’ design. In addition to its aesthetic appeal, the façade’s construction also has a practical aspect, with flaps integrated in the lower part of the glass elements to ensure that the offices are naturally ventilated. In addition to the direct fresh air supply, Sign also has a sustainable energy concept in the form of concrete core activation. This is a cooling water piping system that runs through the building’s concrete components, supporting the building’s cooling system. Any heat accumulated is dispersed into the harbour basin. The same technology can also be used to harness heat from geothermal energy. This involves using heat from deeper soil layers to control the temperature of the concrete components. Thanks to the high incidence of daylight on the glass façades, artificial lighting is largely unnecessary inside the offices.

The striking façade structure also presents a challenge, in that large volumes of water flow down its surface when it rains. For this reason, it is of great importance that proper drainage protects the building in the long term. Wuppertal firm Jakob Leonhards Söhne GmbH & Co. KG was responsible for designing the outdoor areas, with their remit also including drawing up plans for targeted dewatering on the premises. The integrated dewatering system needed to be capable of reliably draining any volume of water falling on the façade in its entirety. This required custom-made dewatering channels of above-average width. Despite their wide gratings, the channels needed to avoid being too bulky in appearance, in order to provide the building with an elegant frame. Finding a partner with experience in the custom production of dewatering systems with aesthetic design proved an easy task with Richard Brink GmbH & Co. KG from Eastern Westphalia. ‘The measurements had to be taken at an early stage and the channels manufactured quickly, so that we could begin work on the outdoor areas. This was an exemplary success and we completed the construction project before the interior work was finished. This can only be done with reliable suppliers,’ says Martin Belz, manager at Leonhards.

The integrated Stabile dewatering channels are 50 centimetres wide and covered with a stainless steel mesh grating. Overall, around 100 metres of channel were laid in individual, segmented pieces, in order to trace Sign’s oval shape. The pieces seamlessly hug the façade and lend consistent continuity to the façade’s pattern through the joints of the grating segments. The dewatering channels directly adjoin the large concrete slabs of the surrounding pedestrian paths and terraces, drawing a clean line around the building according to Martin Belz. There was another unique challenge for this construction project: the outdoor area protrudes into public space, meaning the choice of dewatering channel had to be approved by Düsseldorf’s city authorities. Due to the unusual width of half a metre, there were initially some concerns. ‘Ultimately those responsible were won over by the overall impression and high quality of the products, and gave their approval,’ Martin Belz reports.

As well as the volumes of water accumulating on the façade, targeted drainage of the surface water from the terraces was also necessary. For this, the landscape gardener decided on an elegant solution with Lamina slotted channels, also made from stainless steel, ensuring the water is reliably drained. This solution is particularly important as it protects the underground car park beneath the building from the ill effects of water. A further slotted channel was integrated at the revolving door entrance to Sign, thus preventing water ingress in the entrance area..

The outdoor area, covering around 2500m2, was designed to be practical and allow the building to take centre stage. Large concrete slabs combine to form a kind of plate, on which Sign is positioned. The exposed concrete on the stairways and the modest use of plants also add to the practical feel of these areas. Trimmed box trees in conical, spherical or pyramid form are placed in pots on the stairways and at the building’s entrance, bringing a green touch to these areas. The plant boxes can also be moved and flexibly arranged for events. Greenery has been deliberately avoided elsewhere so as not to detract from the building. The stainless steel elements on the handrails along the exposed concrete stairways match the façade channels and stainless steel gratings.
The project client and landscape gardener alike are extremely happy with the overall impact of the outdoor areas. The construction project was completed in just under three months.